November 9, 2017 Hadding
This is a compilation of material that was posted or could be posted on Twitter. For a more coherent presentation, go to Hit Dinesh D’Souza on his Most Vulnerable Points.

Dinesh D’Souza’s narrative about how the Democrats are “the real racists” or, lately, “the real fascists” or even “the real nazis,” is so full of holes, and so easily refuted, that it can be hard to understand why anyone could really be taken in by it.

At least, it is hard to conceive of how somebody with a memory extending back to the 1970s could be taken in by it. In the 1970s, before Trotskyite Jews calling themselves “Neoconservatives” had acquired much influence, conservatism had not yet been entirely redefined as the demand for free markets and less government (which is actually liberalism, not conservatism).  The pro-White motive in conservatism, therefore, was much more conspicuous a few decades ago. For anybody who remembers that, D’Souza’s contention that Segregationists were leftists is such obvious balderdash that it requires no refutation. Certainly, Rush Limbaugh, born in 1951, knows enough that he cannot genuinely take D’Souza seriously in this — yet he plays along.

Nonetheless, there are sincere people, all of them I suppose too young to remember politics before Reagan, who are not just playing along but really have been deceived by D’Souza. Because they are sincere, they can be persuaded.

I have had some success in convincing followers of Dinesh D’Souza on Twitter that he has been lying to them. If somebody says that D’Souza’s book is excellent or interesting, I respond that it is a stupid book. Alternately one could say that it is a very dishonest book. Thereupon there is a reaction of incredulity and a demand for an explanation. Now a discussion begins. These are the points that I have used. (I believe that these blurbs are all short enough to be copied and pasted on Twitter.)

Nineteen out of thirty-two governors who signed eugenic sterilization into law (59%) were Republicans.

The picture that Dinesh D’Souza tries to paint, is that REPUBLICANS WERE ALWAYS CONSERVATIVE AND NON-RACIST, and DEMOCRATS WERE ALWAYS LEFTIST AND RACIST. If eugenic sterilization was mainly a Republican cause then HIS PICTURE IS MESSED UP. That happens to be the case.

In fact, the label “progressive” was particularly associated with Republicans like Theodore Roosevelt. D’Souza carefully avoids mentioning this.

Dinesh D’Souza has laid a booby-trap for Republicans with this book. If they follow his lead by noisily condemning eugenic sterilization, it is only a matter of time before somebody points out that it was supported first and foremost by Republicans.

Even today the Republican Party has its “progressives.”

The Republican Connection to Slavery

Dinesh D’Souza always claims that only Democrats owned slaves in 1860. When somebody cites the well known fact that Ulysses S. Grant owned a slave, D’Souza asserts that Grant was a Democrat at that time. In fact Grant was nonpartisan. Thus, Grant was a non-Democrat who owned a slave, and far from unique.

Many Whigs were slaveholders. While Northern Whigs who opposed slavery joined the new Republican Party, many Southern Whigs did not. The Confederate Vice-President, Alexander Stephens, was a slaveholding Whig from Georgia. D’Souza’s assertion that only Democrats owned Slaves in 1860 is false.

There were also some Republicans who owned slaves. Robert Jefferson Breckinridge, a slaveholder from Kentucky who favored the gradual abolition of slavery and resettlement of freed Blacks outside of the United States, may have been still a Know Nothing in 1860, but was temporary chair of the Republican National Convention in 1864. He supported Lincoln because he wanted the Union to be preserved. Lincoln’s exemption of Border States from the Emancipation Proclamation was obviously an accommodation to supporters like Breckinridge who owned slaves.

So, Dinesh D’Souza blames Democrat slaveholders but not Whig slaveholders? What about the fact that Abraham Lincoln campaigned for our three slaveholding Whig presidents — Wm H. Harrison, J. Tyler, & Z. Taylor? It does not seem that Lincoln was a committed abolitionist at all.

The Supposed Party-Affiliation of the Ku Klux Klan

Dinesh D’Souza claims that the Ku Klux Klan was “the military wing of the Democratic Party.” Anybody who went to school in the United States should know that no U.S. political party ever had a “military wing.” Furthermore, the Klan of the 20th century often supported Republicans.

Citing Eric Foner Dinesh D’Souza calls the KKK “the military wing of the Democratic Party.” What EF wrote is: “IN EFFECT, the Klan was a military force serving the interests of the Democratic party, the planter class, and all those who desired the restoration of white supremacy.”

Eric Foner, incidentally, is a neo-Marxist Jew from New York City. Dinesh D’Souza had to lean heavily on such disreputable sources for his book The Big Lie.

Only Democrats would make deals with Fascists? Really?

The USA and Fascist Italy had positive relations, during Republican as well as Democratic administrations, until the invasion of Ethiopia in 1937. Dinesh D’Souza wants to pretend that all men of good will saw Mussolini as a bad guy from the start, and that was not the case.

There used to be conservative Democrats. D’Souza pretends that segregationist Democrats were leftists when in fact figures like Senator James Eastland (Democrat, Mississippi) were regarded as extremely conservative.

Conservative Democrats were not LIBERAL LIKE YOU, Dinesh. They tried to conserve the community school, States’ Rights, individual rights, freedom of association, public morality, and LAW & ORDER.

Would you like to explain, Dinesh, what was conservative about federally mandated school-desegregation and forced busing? It looks like LEFT-WING TYRANNY to me, and that was the consensus among White people in the South. CONSERVATIVE DEMOCRATS OPPOSED THIS LEFT-WING TYRANNY.

Senators LYNDON B. JOHNSON and ALBERT GORE, SR. were NOT TYPICAL SOUTHERN DEMOCRATS. They both REFUSED to sign the 1956 “Southern Manifesto” of opposition to federally mandated racial desegregation.

Two of the 101 Southern politicians who signed the Southern Manifesto were Republicans from Virginia.

They claim, “Democrats voted against Civil Rights,” or even, “More Republicans than Democrats voted for civil rights.” Both claims are false. The vote was very regional. Not one Southern Republican voted in favor of that Act. The only Southerners voting for it were a few Dems.

Dinesh D’Souza says: “Every segregation law in the South was passed by a Democratic legislature and signed by a Democratic governor.” This is literally impossible, since most of those states had adopted anti-miscegenation laws before the Democratic Party even existed.

One state of the “Jim Crow South,” West Virginia, received its  segregation-laws under Republican rule, beginning with Arthur I. Boreman in 1863.

Eugenic Sterilization and the former Confederacy

The eugenicist movement was weaker in the former Confederacy than in the rest of the country.

While 32 out of 48 (67%) of the United States enacted eugenic sterilization laws, only 55% of former Confederate states enacted such laws, compared to 70% of the other States.

23 out of 32 states that enacted eugenic sterilization laws had no mandatory racial segregation.

The Southern Segregationist Migration to the GOP

White Southern Democrats started voting for the GOP because Richard Nixon in 1968 and 1972 seemed to oppose forced busing. This method of winning the segregationist vote for the GOP, called Nixon’s “southern strategy,”was devised by Kevin Phillips.

Dinesh D’Souza tries to obfuscate the well known fact that most Southern segregationists switched to the GOP by putting the focus on Segregationist politicians, of whom very few switched parties.

Not many segregationist politicians changed parties, because the Democratic Party continued to be dominant until 1980. Politicians like Senator James Eastland (who died in 1979) would have been less influential in the GOP. But those segregationists were conservative!

Some significant public figures from the South who switched from the Democratic to the Republican Party are: John Tower, 1951; Strom Thurmond, 1964; Jesse Helms, 1970; Trent Lott, 1972.

More Democratic than Republican politicians voted for the Civil Rights Act of 1964: in the House there were 153 D and 136 R votes in favor; in the Senate, 46 D and 27 R votes in favor. And of course it was signed by a Democratic president, sleazy LBJ.

In 1964 there were, from the former Confederacy, 12 Republican Congressmen and 1 Republican Senator (John Tower of Texas): every single one of them voted against the Civil Rights Act.

The racial attitudes of the two parties by 1983 can be roughly gauged by the Senate’s vote on a holiday to commemorate MARTIN LUTHER KING. While majorities of both parties voted for the holiday, ONLY 4 DEMOCRATS — BUT 18 REPUBLICANS — VOTED AGAINST THE HOLIDAY. 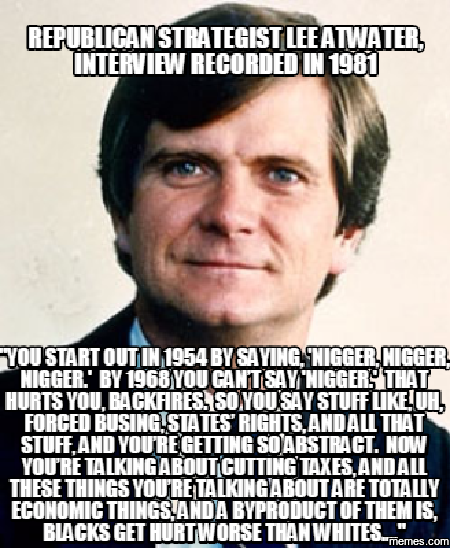 A Misrepresentation of Both Parties

As it turns out, what D’Souza calls “the nazi roots of the American left” are, on the one hand, “progressive” Republicans, and, on the other hand, conservative Democrats that have now migrated almost entirely to the GOP.

In America: Imagine the World Without Her, Dinesh D’Souza declared that “there was no genocide” of American Indians, that this was just another Big Lie by the left to make Americans ashamed of their country. But now Dinesh D’Souza himself is telling this “Big Lie.”

“By some estimates, more than 80 percent of the Indians perished…. But there was no genocide. Millions of Indians died as a result of diseases they contracted from their exposure to the White man: smallpox, measles, cholera, and typhus….”  (Dinesh S’Souza, A:ITWWH, p. 93)

“Today we think of Indians as tragic figures, woebegone on the reservation. But that’s not how Andrew Jackson … saw them. Jackson knew the Indians were canny, organized, and strong…. We should not regard the Indians as passive weaklings.” (Dinesh D’Souza, A:ITWWH, p. 102)

“What term other than genocide can we use to describe Democratic president Andrew Jackson’s mass relocation of the Indians?” (Dinesh D’Souza, The Big Lie, 2017) “But there was no genocide.” (Dinesh D’Souza, America: Imagine the World Without Her, 2014)

Dinesh D’Souza quotes Andrew Jackson out of context, “It was dark before we finished killing them,” and leads his readers to believe that this refers to an act of genocide. In fact those killed (generally) were warriors fighting to the death in the Battle of Horseshoe Bend.

Dinesh D’Souza’s attack on Andrew Jackson as a “racist” would instantly be recognized and reviled as Cultural Marxist propaganda if it were not clothed in Republican partisanism.

What do you think President Trump would say about Dinesh D’Souza’s attack on Andrew Jackson as a “racist,” given Trump’s admiration for President Jackson, and the fact that he has been compared to President Jackson (and likewise called a “racist”)?

These are points that any sincere person should be able to grasp without much difficulty.

One could also dispute D’Souza’s assertions about fascism, but because it is a more obscure subject your interlocutors will find the argument harder to follow.  Therefore it is better just to point out the misrepresentations about American political history.

One young woman asked me if there were another book that I could recommend to her, perhaps one that refutes D’Souza. I told her that I was writing that book.